The breakthrough innovation of the Ethereum blockchain is the enablement of smart contract execution in a decentralized way, which opened the door for decentralized applications interacting with digital assets. The next major step on the roadmap of web3 will be the bloom of decentralized social networks and the blockchain-based Metaverse. A decentralized social graph protocol to describe the relationships between users and entities will be a critical backbone for this.

The rise of global social network giants has empowered the centralized tech cartels to misuse user data, infringe on user privacy and impose censorship. As reported after the investigation by Cambridge Analytica, Facebook collected social graphs and personal profiles from millions of users without their consent, with the end goal of fueling more directed political advertising and inappropriately profiting from the personal data of their users. The current landscape of web2, filled with centralized social networks, has deviated from the principle of the World Wide Web. Namely: to enable the decentralization of information on a large scale.

In the early web2 era, there were isolated social graphs for each social application, but people quickly got tired of registering and redeclaring friends on every new site. Thus, the optimal solution at that time was to consolidate all the relationships onto one app, i.e. Facebook. As soon as Facebook gained mass adoption and realized the value of the social graph it owned, the company swiftly changed its policy and shut down its API to protect itself from future competition. The initial promise of a shared social graph was broken, and the door to the world's largest social data was closed for good.

As the next stage of web3 begins to take shape, the CyberConnect protocol will offer decentralized options for how data is used and perceived with the following features:

At the heart of CyberConnect is a tamper-proof data structure that efficiently facilitates the creation, update, query and verification of user-centric data. Long-term data retention on CyberConnect is guaranteed through Ceramic’s blockchain anchoring and a custom data pinning service.

CyberConnect also uses Ceramic and the platform's 3ID DID method to ensure that users are authenticated and authorized to write data streams. The 3ID DID handles secure key rotation (different from blockchain private key) so that users are not at risk of losing their transactional private key and thus access to all their corresponding social data. 3ID DID also supports cross-chain, multi-wallet use cases so that users can connect accounts into a seamless identity structure, ensuring CyberConnect is future proof.

CyberConnect also uses IDX, Ceramic's identity protocol, for easy user data indexing and integration with other protocols and applications. IDX provides a unified interface for application developers to query data within an user's namespace, both within and outside of CyberConnect.

CyberConnect also sources and curates social graph data from platforms including Foundation, Rarible, and even web2 platforms such as Twitter. The aggregation of all this data creates a rich and unique user experience. For example, imagine a social platform that is able to provide every user with an automatically generated "suggested user list" based on who they have bought NFTs from historically, who they've transacted with (sent/received tokens or NFTs), and who they follow on other platforms like Rarible and Twitter. This is dramatically different from most new social platforms being created in today's centralized architecture, in which you start from scratch at every opportunity.

CyberConnect also indexes higher dimensional network data, which allows it to generate new connection suggestions based on existing social graphs. This curation and indexing aims to combine both the user-owned publicly accessible social graph with other off-chain data from across web2 and web3 applications.

This universal social graph index is exposed to application developers through an API gateway. Developers can easily build a new "instagram for NFTs" without worrying about building and managing the corresponding database to store contact lists and follows. As such, CyberConnect accelerates time to value for application developers, allowing them to focus on content curation and recommendation algorithms based on the social graph data. Similarly, developers can focus on game experience instead of social components, using CyberConnect to import existing friends lists, similar to Steam.

What's Next for CyberConnect

Beyond the CyberConnect Protocol, the CyberConnect team has also recently announced CyberChat, a trustless, decentralized chat app that helps round out the social ecosystem for web3. CyberChat enables users to log in with a blockchain wallet, create their user profile based on on-chain data, and frictionlessly send chat messages while interacting with the blockchain. With CyberChat, decentralized projects and DAOs can now manage their communities on a crypto-native basis.

For more information, read the official white paper on the CyberConnect website. Follow the team on Twitter or join their communities in Discord & Telegram to stay up-to-date! 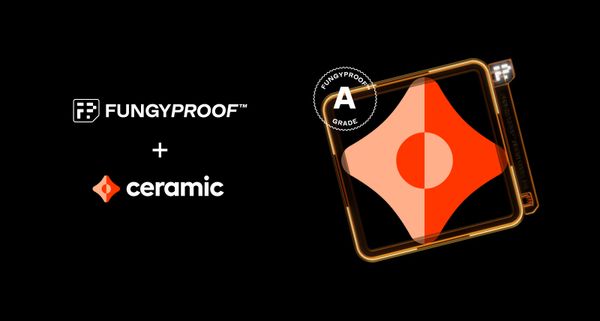 How FungyProof uses Ceramic for NFT grading and enriching.

Register for the virtual hackathon for two weeks of building, workshops, and more than $10,000 in prizes!